It has been a tough few days for my wee man.

Last week, a letter came home in Neil’s bag saying that his class would be going on a trip to a farm. He phoned me while I was at work, and very excitedly told me all about it, instructing me to bring him home some money so he could pay for it.

Wednesday quickly arrived, the morning of his big trip. Before we left for the school bus I set a few rules and gave some safety advice, stay with the group, do as your teacher says, just the standard things because sometimes you have to set it out clearly for Neil. He seemed in good enough form, not particularly excited, but he generally doesn’t show much excitement for things, so that wasn’t out of the ordinary. I waved him off on the bus as normal and returned home.

At ten past nine the phone rang. I knew it was the school because the number flashed up on the call ID. I always panic a little bit when the school phone, because it tends to mean something has happened. It was Neil’s teacher, phoning to say Neil was having a bit of a meltdown, sitting in the corner with his hood up refusing to move or talk to anyone. He didn’t want to go to the farm, and he was distressed about it. I offered to go in and pick him up, but after a little while he had decided he would like to go in to the year one class and spend the day with them.

I spent the rest of the day feeling anxious, wondering how well he was coping. I phoned the school at break time and they said he had got quite upset when he changed his mind and decided he did want to go to the farm after all, only to find the bus had already gone, but that he had settled and was playing happily in the classroom. Thankfully, Caitlin is in year one so there was a familiar face for him.

As soon as he stepped off the school bus in the afternoon I knew he wasn’t feeling good. When we got home I asked the kids if they fancied a trip to the park but Neil refused, then lay in a ball on the floor grunting at me whenever I spoke to him. He didn’t respond too well to any of my suggestions, I offered him his weighted shoulder pad and some of his sensory toys but he didn’t want to do anything. Sometimes I’m not really sure how to respond when he is like that. I decided to take Caitlin out on her own to give him some space, so Neil stayed at home with his daddy while we went to the park for half an hour. 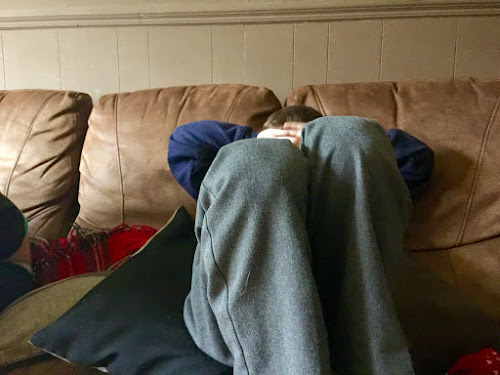 When we returned he wasn’t in much better a mood, and spent a lot of the afternoon on the sofa hiding his face from me. After a while his spirits lifted a bit, but the stress continued in other ways, and I could tell he was feeling anxious for the rest of the day. He was still awake at 1am, lying in his bed making loud stimming noises.

I feel bad for him because I think he would have really enjoyed the farm once he had got there, if he could have overcome his anxieties. I thought I had prepared him enough before the trip (he needs plenty of prep before a change, or a new experience), but maybe I hadn’t…. Or perhaps I had gone on about it too much and caused the anxiety. I tried to gently ask him why he had decided not to go to the farm, but he just replied that he was nervous and wouldn’t give anymore information, and I didn’t want to push and cause more upset.

He was still struggling a bit on Thursday, getting upset at small things and generally not being in a good mood. It will usually take him a few days to get back to normal after a meltdown, hopefully he will be himself again by the weekend. I think in future I’m going to have to volunteer to help out at school trips so that I can support him, because it’s unfair that he should miss out on fun experiences due to his anxieties.

10 Tips for Running a Successful Small Business From Home

Casually climbing in to toilets