In January I had a grand plan, I was going to excercise every day and I was going to love it. Fast forward a month, the buzz of the new year has worn off, and I’m left feeling like a bit of a failure. I wrote this post about getting back on the fitness wagon. I said this year was the year I would make the lifestyle change and stick at it. So far I have made myself out to be a bit of a liar, because other than a couple of goes on the treadmill (which almost killed me!) I have done very little.

Not only have I failed to do any exercise, but I have spent the last few weeks absolutely stuffing my face. It doesn’t matter what I eat, I still seem to feel hungry. ALL OF THE TIME. I don’t know what wrong with me, a few nights ago I poured myself a large bowl of cereal not even an hour after finishing a full, heaped plate of dinner. I don’t remember ever having such a big appetite, or such little will power, but I just can’t seem to say no to food at the moment.

I still want to get fit, but I think that is a bit too vague of a goal. I need something to work towards, something achievable. I think my best plan of action is to set some small, manageable tasks every week. I hope that by working towards a small goal each week and achieving it, I will be motivated to keep going and complete next weeks tasks. When you set a big goal, and it is so far away, it can be difficult to focus on it and not feel a bit disheartened at the lack of progress, but by focussing on and completing smaller tasks I can really feel like I’m getting somewhere. Or at least, that’s the theory I have.

I need to be realistic. As much as I would love to put my trainers on and go for a nice long run a few nights this week, it’s really not happening. I’m going to have to build up my fitness levels because I can’t even run for a minute before feeling so breathless I feel like I’m going to collapse….

So instead of running, I’m going to walk, as much as I can. My goal for this week is to walk 10000 steps on at least three of the seven days. I know 10000 is achievable because I did this last month, but it’s not easy, it is going to take a little bit of effort on my part. It might sound rubbish, but I have to start small and work my way up. Hey, who knows, I might even speed up to a jog at some point, but I’m not promising anything.

I feel bad for my beautiful trainers being stuck in the cupboard and being forgotten about. They are so colourful and beautiful… I think I’m just going to wear them around as motivation! 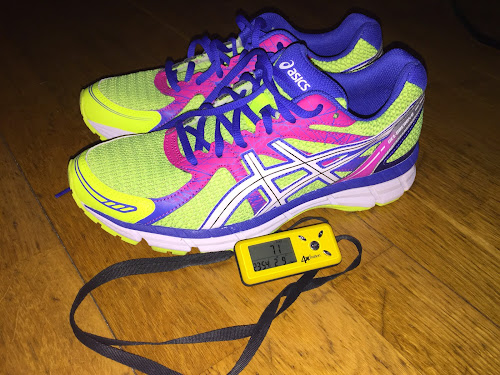 Have you had a bit of a slump now that the new year is over? How do you keep yourself motivated to carry on with your fitness plan?
If like me you are failing a bit, don’t worry about it, stuff your face with a few cream eggs before bed (I just can’t help myself, they are so tasty!) because tomorrow is a new day, and we can do this!